The Forest Stewardship Council (FSC) A.C. is a civil „company“ that is based in Mexiko[1]. The organisational structure is highly complex, even to the point where it is internally hard to track. Our attempt to illustrate it can be found here[2].

Most countries (around 37 at the moment) have “local groups”, many of them associations. National Standards for Forest Management can only be developed if there is a functioning Working Group. In Germany, there is the Association for Responsible Forest Management (de: Verein für verantwortungsvolle Waldwirtschaft e.V.), plus a Limited Liability Company (Ltd) that is closely connected to the association. Additionally, the FSC Germany has three subsidiary companies – the ASI (Accreditation Services International GmbH)[3], the FSC Global Development GmbH[4]  and the non-profit limited FSC International Center[5].

Each regional group, as well as the FSC AC itself, is divided into three different chambers, namely environment, economy and the social chamber. New FSC-members are automatically assigned to one of these chambers, according to their field of work. eNGOs, for example, are always assigned to environment-chamber, regardless their interests or wishes. Also, the membership-option is limited to local stakeholders. Being a stakeholder is the only entry criteria, a background in forestry, ecology or similar is not required. As a result, regional FSC Forest Management Standards are developed by semi-professionals; standards, definitions, policies and all other FSC-documents don’t name (or ever use) scientific resources, resolving in FSC-work, that completely ignores centuries of valuable research realted to forestry management and ecology.

To solve this soft spot in their public appearance, FSC and some NGOS started a system that we call the “quoting circle”: Each internal documents points toward other internal documents. In the rare case that it uses quotes from external documents, they are most likely written in cooperation with or provided by a supporting company/NGO. This system tries to provide a “credibility”, without risking to expose the FSC to critics or discourse – a common practice, brought to perfection by some NGOs (like e.g. the WWF).

It does not make their claims true.

Officially, the FSC was initiated during the “Rio Conference” (United Nations Conference on Environment and Development ) in 1992. Contemporaneously, many sawmills and trading companies were shutting down, due to the rain forest timber boycott in 1986/1987. Sales suffered from a setback of nearly 90%, compared to previous years. Mysteriously, the FSC solved most of the affected companies problems by making this timber “acceptable” again. In our opinion, that only leaves the conclusion that the true reason for founding the FSC was less “protecting the forest” and more “protecting out interests”. A role, that the FSC still fulfils.

Does that sound unbelievable?

How about the FSC stating it themselves? We quote Mr Sayer, chairman of the Association for Resonsible Forest Management:

„The ecological sustainability, that is widely associated with the FSC, […] just played and plays a seconday role.”

Also, the FSC does not have any understanding of global responsibility (that is absolutely crucial for sustainability!). The global perspective, that the FSC propagates itself, must therefore be considered non-existent. One example is their call for a bigger amount of German forest, which should excluded from forestry. In a German perspective, that seems to be a reasonable tool for nature conservation (well, at first sight, looking more carefully there are a few problems with such a simplified approach). Nevertheless, the global perspective draws a completely different picture. Losing German timber, means that the still needed goods have to be harvested in and transported from other forests. Usually from boreal forest, over 5000km from Germany. What that means in term of ecological consequences, shouldn’t need much explanation. Further information will follow.

As previously mentioned, given the circumstances it is not surprising that the National Standards don’t reflect current research recommendations, but instead includes claims that are expected to reach maximum publicity. That alone is bad enough to fight the FSC. Considering, that they – as the global player that they are – completely ignoring their responsibility and concentrate on making profit, leading centuries of forestry research ad absurdum, worsen working conditions, decreasing biodiversity, it is surprising that most NGOs still hold on to it.

More examples: the Enquete Komission zum Schutz der Erdatmosphäre argued multiple times, that timber can not be taken from (tropical) primary forests, because they would by definition lose their status by doing so. Nevertheless, some of these forests are FSC-certified, doomed to be cut in the name of “responsible forest management”.  Other FSC-“requirements” (to get certified) are completely random, or almost vintage in their underlying argumentation. Further information can be found on our website, and in different open letters we posted since September 2017 (only available in German so far, please contact us for translations).

It makes him the most desirable indulgence-instrument for politics, NGOS, the construction industry, the retail sector,… – only the forest, that he is supposed to protect, does not profit. At all. He [the forest] would be way better of taking his chances in the precise, more detailed regulations of German forestry laws, which generally are a lot more consistent, scientifically proven and developed in years of careful research and calculation. Of course, these laws are far from perfect as well. But they are a lot better than the rudimentary, propaganda-based FSC-Standards.

How about taking away the responsibility for our forests from a private company (based in Mexiko), and take it into our own hands, as a society; if there is one thing we should have learned from history, it’s that outsourcing our common responsibility into a for-profit-company is and can never be anything but an illusion. 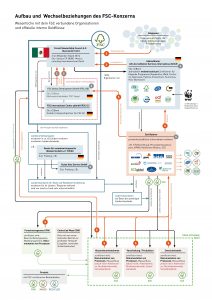 With the attached figure, we tried to mind-map the structures within the FSC-system. Since this is a fairly huge task, we can’t promise that this is complete nor that is it perfectly displaying the interconnections in all their forms. This is only a first try that will be extended and improved with further research.  Also, this is a simplified illustration to avoid overcomplification and to keep itas simple as possible without missing out the essential points.

The underlying sources were mainly FSC-documents and official German legislative papers. Unfortunately, some of these contradict each other, which makes it diffucult to find the underlying truth; we are open for any suggestions.

The document can be downloaded in high definition here: Organigramm